If you purchase a second-hand device and it is still linked to the previous owner's iCloud account, you may have a very hard time accessing any features on the device.

And since you will not be able to sign in to your own iCloud account, the device is basically useless to you.

For this reason, most people who have purchased second-hand devices, often find themselves looking for ways to unlock the device, particularly if you can’t reach the previous owner.

One tool that you can use to unlock the device is Unlock Mtool. But if you have been looking for a solution for a while, you have no doubt come across many similar solutions.

The main purpose of this review is to help you determine if Unlock Mtool is a good solution that you can rely on to unlock your device. 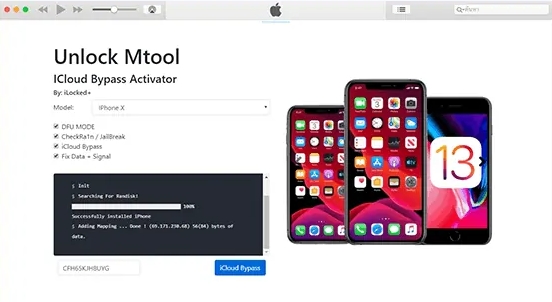 There is a lot of speculation over whether this tool is legitimate or not, although at first glance it does appear fairly functional.

It has more functions than any other unlocking tool and for this reason, it may be at least a second look.

Some users have even gone as far as to say that it is one of the best iCloud Activation removal tools in the market.

To be safe when using Mtool Unlock to remove the iCloud activation lock, you should ensure that you have downloaded the right program and you are using it properly.

One of the main problems with Unlock Mtool is that it is almost impossible to find an official download link for it.

This doesn’t mean that there aren’t thousands of websites that claim to have the download link, many just offer fake versions of the program that may pose a serious risk to your device and computer.

How to Use Unlock Mtool

But if you wanted to test the program for yourself, find the right download link to install Unlock Mtool on to your computer and then follow these steps to use it;

Step 1: You will first need to jailbreak your iPhone if you haven’t already. Mtool will not work on non-jailbroken iOS devices.

Step 2: Now, open Mtool on your computer and then connect the locked iOS device to the computer.

Step 3: Mtool should detect the device. When it does, click on “Start” and the unlocking process should begin.

In a few minutes Mtool will notify you the device has been unlocked. You can try to sign in with another iCloud account to confirm.

We took the time to test Unlock Mtool on a number of iPhones running different versions of iOS.

To ensure that we could test all aspects of the program, we made sure that each device was locked and we used iPhone models from iPhone 5s to the latest iPhone 12.

Unlock Mtool was disappointing for all devices. It failed to unlock even a single device and we can only conclude that Mtool is not a reliable solution for unlocking iOS devices.

The following are some of the other disadvantages of using Mtool;

How Can I Remove iCloud Lock without Unlock Mtool

We obviously don’t recommend that you use Mtool to unlock your device, simply because you could expose the device and your computer to untold dangers and also it is a waste of time.

The best alternative way to unlock your device is to use Unlockit. This is another tool that can unlock any iPhone model, running any version of iOS quickly and successfully.

Unlockit has the necessary features to unlock your device, including the following;

Follow these simple steps to use Unlockit to remove iCloud Activation lock on your iOS device;

Step 1: Download and install Unlockit on to your computer. Once it is installed, open the program.

Step 2: Choose “Remove iCloud Activation Lock” from the options on the main screen. Connect your iOS device to the computer and then click “Start.”

Step 3: To remove iCloud activation, you will need to jailbreak the device. Unlockit will begin downloading the correct jailbreak package needed, just click “Start” to begin the download.

Step 4: When the jailbreak package has been downloaded, click on “Jailbreak” to begin jailbreaking the device. You will be prompted to put the device in DFU mode, just follow the onscreen instructions to do it.

Step 5: The jailbreak process shouldn’t take too long. When it is complete, confirm the device information on the screen and click “Remove” to start removing the iCloud activation lock on your device.

A few seconds later the process will be complete and the device will be unlocked. You can then sign in with a new Apple ID and continue to access all the features and apps you want to use on the device.

Mtool is one of the many iOS unlocking tools that you will come across when looking for a way to remove iCloud Activation Lock on your device.

While it may seem on the surface like a great tool to choose from, our tests have shown that it doesn’t work at all.

The best way, therefore, to unlock your iOS device and gain access to all the necessary features and apps is to use Unlockit.