An iOS update will not only provide new and more sophisticated features to your iPad or iPhone, but it will also help you fix some of the device's issues.

However, as you may know, upgrading your smartphone may be a nuisance, and the process can take a long time, especially if you do it over the air.

Due to this reason, Apple suggests upgrading your smartphone at night or while it is not in use.

Unfortunately, few iOS users complain that the update freezes in the middle or takes too long.

If this occurs, you will be unable to use your device for extended periods, which is not ideal for many people. So, what can you do if the iOS 14/15 upgrade is taking forever?

In this post, we'll show you how to solve this frequent problem in several different ways.

Because the iPhone device type, device performance, content in the new iOS version, download speed of the internet connection vary,

it's nearly impossible to give an exact time estimate for how long it takes to update and install iOS 14 or the latest iOS 15.

Because there are many changes in the new iOS version, including many bug fixes and new features. For iOS 14.3 devices, the download size would be about 400 MB. The update for an earlier version, such as iOS 13, is likely to be about 2GB or larger.

The average iPhone iOS 14 update and installation time, based on our experience, might take 10-30 minutes. In rare situations, if updating your iOS devices takes many hours, you may be experiencing an iOS 14 update issue.

The following are some probable reasons why your iPhone is taking so long to update.

Millions of users link their iPhones to Apple servers to download and install new iOS updates as Apple releases them.

Apple's server may struggle to keep up with all those individuals connected simultaneously, which might also be the reason which causes you to wait for a long time.

When iOS 13 was launched, many users noticed this issue. So, if you're attempting to install a significant update on your iPhone, bear in mind that many other people are doing the same thing, so be patient! To check if Apple's servers are up and running, go to their website.

How Can I Make My iOS Update Faster?

No matter what reasons may cause the update be stuck, here are a few easy ways to speed up the download of iOS updates:

Make Sure Your iPhone has An Internet Connection

A stable network connection is essential for an iOS upgrade over the air. If your iOS 14 upgrade is taking too long or stalling in the middle of the process, the fault might be with your wireless router or network. Follow these instructions to restart your phone's wireless internet connection via the Wi-Fi toggle:

You can also enable Airplane mode for a few seconds before turning it off. It will reset the network and provide you with a stable network connection.

One of the most typical problems to consider is a lack of memory space. It's conceivable that there isn't enough space on your iPhone to allocate the iOS 14/15 update file if your storage is running low.

As a result, if your device doesn't have adequate storage space, the update may fail. When this happens, it's time to free up some memory space. To get started, follow these steps:

You can view how much storage each type of data consumes, allowing you to quickly select which files to erase from the device if you do not have enough room for the iOS upgrade. Give your phone another reboot to clear the cache, and then try upgrading again when you've freed up its memory.

I Don't Want to Wait Anymore. How to Cancel the Update?

Follow these steps if you want to cancel the update: 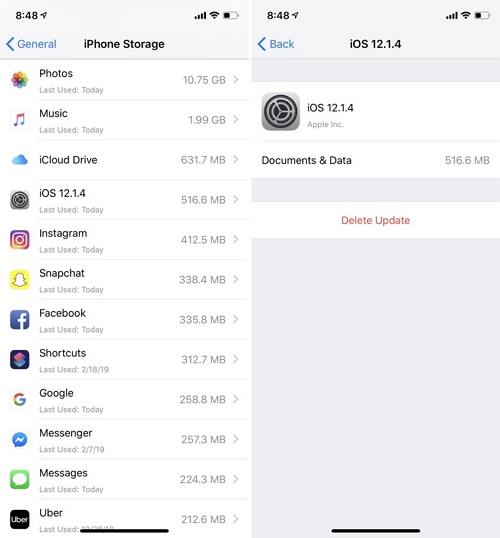 Now, go back to the Software Version area, and you'll notice that you can Download and Install the newest update once more. You can also permanently disable iOS firmware upgrades on your iPhone or iPad if you want to take this a step further.

Now you know how long the iOS 15/14 upgrade takes and what to do if it takes too long. If updating your iPhone takes more than 2 hours, it is too long, and you can use the methods listed above to resolve this issue.