What Is Shadow Ban in Pokémon GO

As more and more people try to get ahead in Pokémon GO by cheating and Niantic has responded by issuing account bans.

There are certain types of bans that you can get from a temporary ban that affects your account for a pre-determined duration to a permanent ban which means you will never be able to access your account again.

When it comes to Pokémon GO bans, one word is thrown around quite a lot; Shadow Ban. But what is it and how will it affect your account? Keep reading for the answer to this question.

What is a Pokémon GO Shadow Ban? 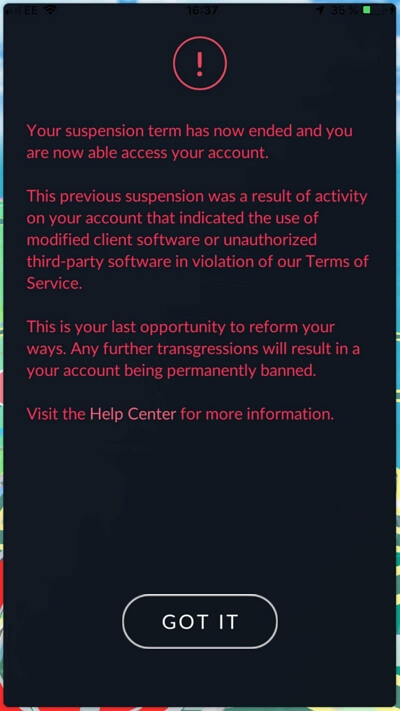 You will not be able to see Eevee, Growlithe and absolutely no Snorlax, Dragonite, and Tyranitar.

Shadow Ban is frequently caused by logging into your account with a third-party tool such as an IV Checker (IVFly, IV Go).

It can also be triggered by botting - certain reports of this occurring as a result of spoofing have been made (but not entirely verified).

To announce the shadow ban, Niantic had the following to say on Reddit;

“We're committed to maintaining the state of Pokémon GO and our community of Trainers. People who violate the Pokémon GO Terms of Service (including by using third-party software and other cheats) may have their gameplay affected and may not be able to see all the Pokémon around them. While we cannot discuss the systems implemented, we can confirm that we are constantly refining new ways to ensure the integrity of the game in order to keep it fun and fair for all Trainers.”

Why Did Pokémon Institute a Shadow Ban?

Niantic instituted shadow-bans as a punishment for accounts and users who try to abuse the Pokémon GO Application Programming Interface (API).

The Pokémon GO app must connect to the Pokémon GO servers every time you play the game and when you use third-party apps and chats, they also access these servers, putting an unnecessary strain on the servers, but also giving you an unfair advantage.

There are two types of activities that Niantic is trying to discourage with a shadow ban;

How Long Does a Shadow Ban Last

According to some users who received shadow ban warnings before, it takes about 10-15 days for a shadowban to go away. Some users even got shadow banned for more than a month.

How to Know if You Have been Shadow-banned

If you are using third-party apps such as Pokémon tracking apps, then you may already be shadow-banned.

You will also know that you have been shadow-banned when you see the in-game warning, but sometimes this warning can also mean that your account has been flagged.

To be sure if you have been shadow-banned or not, you can test your account against another user’s account.

Simply walk around as you would normally while looking for Pokémon to see if you can see the same Pokémon the other user sees.

If the other user sees Pokémon that you don’t see, then there is a possibility that you have been shadow-banned.

What to Do If You Have Been Shadow Banned

If you think you’ve been shadow banned for the wrong reasons, submitting a ticket is often the best thing you can do at first.

While you might not even receive a message back, it only takes a minute to submit a ticket and you never know when you might be the exception.

After that, you should immediately uninstall suspicious apps such as IV Go, Blossoms Pokemon GO Manager, and others. All apps that interfere with the Pokemon GO game.

Lastly, you should also revoke the authorization you most likely gave to these apps and their services.

From there, you only have to wait it out and see what happens.

A shadow ban will typically be lifted after a week and once it has been lifted, avoid using third-party apps such as IV scanners to play the game and you will be able to avoid a ban in the future.

Is There any Way to Get Around a Shadow Ban?

You may not be able to see all Pokémon when your account is shadow-banned, but you can still catch them if you have Pokémon GO Plus.

But Pokémon GO Plus costs about $50 and it will only shoot a single Poke Ball, with no berries.

Since the odds of catching a Blissey or Snorlax are significantly diminished with a Poke Ball, it's best to just wait for the shadow-ban to end.

That’s everything we know about a shadow-ban. If you have any questions or if you are still not sure if your account has been banned, use the comments section below to let us know.