How to Catch Landorus in Pokémon GO

Pokémon GO accurately represents how much technology has evolved in video games.

It uses AR (Augmented Reality) to give an immersive experience, and players use their phone’s built-in GPS to travel around and collect items in real-world locations. These items include Pokémon, abilities, and more.

However, some items and Pokémon are scarce. They spawn rarely and are very difficult to find.

One such rare Pokémon is Landorus. This Pokémon is tough to spot and even more difficult to catch or battle with. If you are on the hunt to catch Landorus on Pokémon GO, then look no further.

In this guide, we will walk you through everything you need to know to battle and obtain Landorus in Pokémon GO. 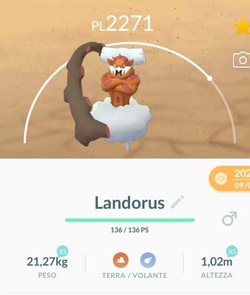 First introduced in generation five, Landorus is a legendary Pokémon from the Unova region. It is a ground and flying-type member of the Force of Nature.

The original Landorus form is called the “Incarnate Forme.” It cannot evolve into another Pokémon, but it has a secondary forme known as “Therian Forme.”

This rare Pokémon is mighty in combat and will give you a competitive edge over your opponent when you equip the Stone Age power with it. However, it’s vulnerable to water attacks and even more to ice attacks.

Landorus was previously a part of Season of Legend’s research questline. With Thundurus and Tornadus, Landorus receded during the Season of Heritage. As a result, they have become very hard to locate and acquire, which makes sense considering all three are legendary Pokémon.

Regardless of how difficult it is, there are still ways to find Landorus. Both seasoned trainers and players returning from a break can set out on a successful Landorus hunt with the help of this guide.

Catching a legendary Pokémon like Landorus is very challenging. You will rarely encounter a Landorus randomly popping up on its own after the Season of Legends has ended.

But there are two ways trainers can try to obtain a Landorus:

Both these methods are tricky and time-consuming, especially since there is no guarantee that you will land a Landorus after completing either of them. That is, unless Niantic, the game developers, places it in rotation.

Landorus and other legendary Pokémon generally pop up in raids as 5-star raid bosses. Only one 5-star boss spawns at a given time. However, Landorus is currently not a part of the ongoing raid or PvP reward lineup.

All hope is not lost though, as it is possible that Niantic might reintroduce Landorus or the other forces of nature as PvP rewards or raid bosses in the future. So be on the lookout because Landorus might spawn as a 5-star raid boss again as it did in the past.

For PvP, trainers who climb up to level 20 in a Pokémon GO Battle League Season will get rewarded with an opportunity to encounter a legendary Pokémon. This legendary Pokémon can be in 5-star raids when you reach the Pokémon encounter reward.

For the Pokémon GO Battle League’s interlude season, the current 5-star raid boss announced by Niantic is the Pikachu Libre. So, you will have to wait for the next GO battle league.

Now that you have an idea of how and where to spot a Landorus, let’s dive into some tips to combat it.

Landorus is an extremely powerful land and flying type Pokémon. To battle it, you have to keep the following things in mind:

Being a ground/flying type Pokémon, Landorus is especially vulnerable to ice-type attacks. Use strong Pokémon like Weavile, Mamoswine, Articuno, Glaceon, Mewtwo, or Jynx.

However, if you do not have an ice-type Pokémon in your arsenal, you can rely on water-type attacks. They won’t deal as much damage as ice, but they can still do the trick.

Be aware of the weather.

Make use of the current weather conditions to plan your strategies so you can have an edge over a Landorus.

If it’s raining, then consider using water-type Pokémon. Yes, ice attacks will do more damage, but it’s different under the rain. Water Pokémon will give you the upper hand as they will be easier to keep on the field. One fitting candidate would be a Swampert. This Pokémon can use Hydro Cannon to deal damage while also defending against Landorus’ rock-type moves.

Be aware of his arsenal.

Refrain from using any fire, electric, or poison types against Landorus to stay safe. In addition, when attempting to catch a Landorus, try using Mudshot coupled with Rock Slide.

Gather three to four people to play the game.

Maintaining all these could be challenging. It’ll be easier to take three to four people with good counters if you want to defeat Landorus.

If you have a Mega Abomasnow energy in hand, combine it with Powder Snow and an ice-type Weather Ball to produce a strong counter.

Increase your chances of winning by working with friends.

Together with your team, you can take over a gym before the raid starts. Battle alongside your friends, pick up Pokémon that are good for raids and train them to level them up. The higher the level, the stronger the Pokémon.

Note: Once you have successfully defeated Landorus, you can only use premier balls to catch it.

There’s nothing more satisfying for a Pokémon fan than collecting rare Pokémon and items. This includes the legendary Pokémon, Landorus.

As it’s complicated to spot and spawns only occasionally, you will need to follow specific guidelines if you want to catch it.

We hope our guide helped prepare you for the task of fighting and capturing Landorus. It will surely make a worthy addition to your Pokémon collection soon!