How to Get Lucario in Pokémon GO

Since the launch of the Pokemon Go game in 2016, Niantic has consistently added new Pokemon to the game. You can encounter these characters in your neighborhood, suburbs, and other locations.

However, most of your encounters will likely be with common Pokemon, like Pidgey and Rattata. If you're looking to find a rare Pokemon like Lucario, you'll need to make some effort. 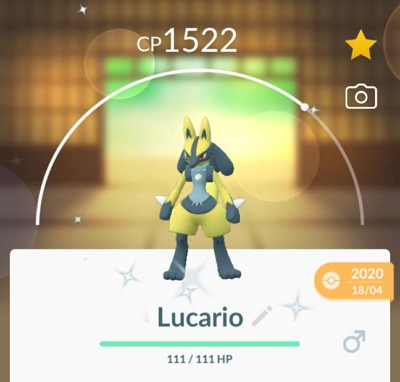 Who is Lucario In Pokémon GO?

Lucario is a Pokemon from the Sinnoh Region, and it's one of the more popular characters released in Pokemon Go.

The reason for its immense popularity is that in the later season of Pokemon the animated series, Lucario is officially captured by Ash Ketchum. Lucario also has its own movie, which is another reason why it's well-known among Pokemon players.

However, many Pokemon players have not yet encountered Lucario in the wild. This fan-favorite Pokemon was added to the game in 2018. The character's design resembles a ninja fox, and it can learn many powerful movesets.

Lucario is a steel and fighting type Pokemon. It is vulnerable to ground, fire, and fighting-type attacks. Most Pokemon players use Lucario for its powerful attack moves, but it also has a great defense.

It can easily resist damage from grass, ice, steel, dark, bug, rock, poison, and dragon-type attacks. Lucario has a combat power of 2703, and it has one of the strongest moveset, Aura Sphere and Counter.

You can also find a shiny Lucario in the game, but the chances are low. The Pokedex description of Lucario is that it reads the feelings of its opponents by using aura waves.

It can also easily stress out if it learns about things it does not need to know.

How to Find Lucario In Pokémon GO

You will need to get the egg from a PokeStop or receive an egg as a gift. You cannot hatch a Lucario from the egg. Instead, you will hatch its first or pre-evolution form, Riolu.

The egg distance should be 2km, 7km, and 10km. Pokemon players have a 0.7% chance of hatching Riolu from a 7km and 10km distance egg, making it one of the rarest Pokemon in the Pokemon Go game.

You can get 10km eggs by spinning Pokestops, but make sure your store has enough space for an egg.

It would take a player an average of 143 eggs before they can hatch a Riolu. They also need to have 50 incubators to have a better chance of hatching a Riolu.

The best way to hatch a Riolu is to get a 50km reward egg from taking part in Adventure Sync. This increases the chance of getting the rarest Pokemon from the egg.

How to Catch Lucario In Pokémon GO

The only way to get Lucario is to evolve Riolu. You cannot catch Lucario in the wild,  so you would need to hatch Riolu from an egg.

But there are no guaranteed eggs that only hatch Riolu, which is why the spawn rate is very low. Each egg has a random chance of hatching any pre-evolution Pokemon. However, a longer-distance egg has more chances of hatching a rare Pokemon.

Once you get Riolu from hatching an egg, you need to evolve it into Lucario. To evolve Riolu, you would need to feed it 50 rare candies. So it is best to start saving up on rare candies.

You can increase your chances of hatching Riolu by participating in many events to get longer distance eggs as rewards. Many Pokemon players spend real currency to evolve Riolu into a Lucario.

Trading has been a major part of Pokemon. It has been around since people used to have Pokemon cards to play. Pokemon players have been trading Pokemon in console video games, card games, and even in Pokemon Go. Trading helps you complete your collection, and it's fun.

Use a player's Trainer Code to add them as a friend in Pokemon Go. Meet up with your friend within 100 meters to start trading. Both parties must select a Pokemon to trade and tap on the Next button.

You can check the Pokemon one more time if you missed any details. Then tap on the Confirm button to complete the trade. Remember, once the trade is finalized, you can undo it.

Once everything is in order, tap on Next > Confirm to finish the trade. Now you have a Lucario that you can use in PVP battles.

Now you know that you cannot encounter Lucario in the wild. The best play for you is to capture the pre-evolution form of Lucario, which is Riulo. Unfortunately, Riulo cannot be encountered in the wild and can only be obtained through an egg.

Whenever you have an egg, make sure they’re the long-distance type. Use an incubator to hatch an egg and hope to get Riolu.

Remember to save up on rare candies even if you don’t have Riolu because once you have it. You’re going to feed it with the candies to evolve it into a Lucario.

We hope that Niantic releases a patch to update the game that allows Pokemon players to encounter Lucario in the future.

Or Niantic holds events in-game that increase the spawn hatch rate for Riolu. Let us know in the comments what approach you’re planning to take.