How to Get Rayquaza in Pokémon GO

I grew up watching Pokemon anime on the Cartoon Network. And trust me when I say this, the series was quite addictive.

So when Niantic took advantage of the show’s popularity and collaborated with Nintendo to launch a Pokemon game, I felt nothing but joy seeing my favorite characters on the mobile screen.

Niantic developed and released Pokémon GO in 2016 as a location-based mobile game. Initially, the game had 150 Pokemon on its roster, with the news of more being added in the future.

Today, there are more than 700 Pokemon in the game for you to discover and add to your collections.

Both fans of the show and the mobile gaming community gameplay of Pokémon GO where the player had to capture, train, evolve, and battle their Pokemon.

Like most free-to-play games, players can purchase items in-game to evolve their Pokemon or get better Pokeballs. But this article isn’t about the game’s features; it’s about catching Rayquaza, the dragon-like Pokemon with unique powers and facial features.

We have done the research and compiled a guide that will help you understand, find, and capture Rayquaza. 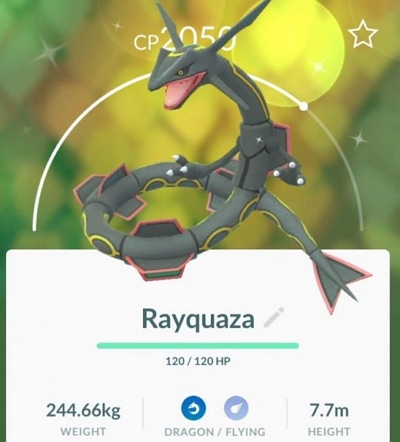 Who is Rayquaza in Pokémon Go

Rayquaza is one of the coolest legendary Pokemon in the game. It's essentially a flying- and dragon-type Pokemon who lives in the Gen III Hoenn Region and is the Weather Trio's leader.

Whenever Groudon and Kygore battle it out, the only Pokemon to calm them is Rayquaza. The first Pokemon to have Mega Evolution is Rayquaza, and it does not need the Mega Stone to achieve the Mega Evolve form.

Do you want to capture a legendary dragon and flying type Pokemon, Rayquaza? If yes, you need to have a strong party to battle it on Raids.

Is Rayquaza Still in Raids?

Pokémon GO players can only capture Rayquaza by completing raids. There are no reports from any player of spotting Rayquaza in the wild. This is why it can be a challenge for players to defeat and capture Rayquaza.

When completing the Rayquaza raid, you would have a low chance of encountering a Shiny version of the Rayquaza. Still, there's no harm in trying.

Before starting the Rayquaza raid, you would need to prepare to defeat the legendary Pokemon.

It is possible to defeat Rayquaza with only two top-level Pokémon GO players having perfect counters and mega evolution Pokemon in their collection.

As it is a five-star raid in Pokémon GO and you're a lower-level player, you would need a team of 5-6 players with at least one mega evolution Pokemon to easily defeat Rayquaza.

How to Defeat Rayquaza in Pokémon GO

Once you've your raid team ready to take on Rayquaza, it is time to choose the Pokemon to take with you. Rayquaza has a combat power of 49,808 CP, which means you would need to do great damage.

Rayquaza is both dragon and flying type; therefore, an ice-type Pokemon is the most effective choice.

Fairy and Dragon types are also best if you don't have a high-level ice-type Pokemon. You can also use a rock-type pokemon to try and damage Rayquaza.

The two best Pokemon to use against Rayquaza are Mega Abomasnow and Glaceon, as they both have great counters.

The Mega Abomasnow is a grass and ice type Pokemon that takes advantage of the Rayquaza's weakness to ice attacks. Mega Abomasnow will take double damage from Rayquaza because it has flying and rock-type attacks.

But you can use the Powder Snow and Weather Ball move to counter and attack Rayquaza with more damage.

Glaceon is the ice-type evolution of Eevee, who has been available since the game's launch.

It has been featured in many events and was also a star of Community Day. You can easily find Eevee and then use candies to power it up and evolve it to Glaceon.

There is a high chance of you having a Glaceon with high CP in your collection. But you'll need to equip it with the Frost Breath and Avalanche move sets to counter Rayquaza.

If you have a Pokemon with high combat power and an ice-type move, it could defeat Rayquaza. Here are a few more Pokemon and their move sets that are great counters for Rayquaza:

In the Rayquaza raid, the weather conditions can have a major impact.

If the weather is Windy, it will boost Rayquaza's flying and dragon-type move sets. Use a dragon-type Pokemon to take advantage of the windy weather condition.

Once you complete the raid and defeat the Rayquaza, you will be rewarded with Premier Balls and a Raqyquaza encounter. When Rayquaza shows up, feed it with berries and use great curve-ball throws to increase your chance of capturing the legendary Rayquaza.

How to Get Pokémon GO without Leaving Home

Pokémon GO uses AR technology and requires the player to move around locations to find and capture Pokemon. Many Pokemon are regional types— these require you to travel far away to discover them.

For example, the Pokemon Heracross can only be found in Southern America, Florida, and Texas. So, if you would like to capture Heracross, you would have to go to any of the places mentioned and look for it in the wild.

For some, traveling to different and faraway places is a luxury, but for most players, traveling from one city to another is unrealistic. Therefore, many opt to use third-party tools and hacks to travel to unknown locations and find new Pokemon.

There are many tools online that you can download to spoof Pokémon GO, but know that using unauthentic ones can get you banned from the game. The good news is that legit tools like MockGo are safe for any location-based games and apps.

If you want to travel to any coordinates to find new and rare Pokemon, you can use MockGo tool. The best part is that you don't even need to leave your location. The third-party tool, MockGo, only works for iOS users. Android users can download a joystick spoof GPS app to teleport to different locations.

For most Pokémon GO players, the main objective is to catch 'em all. In Pokémon GO, achieving the objective is very challenging because you have to travel around the world.

Now you have all the knowledge on how to capture a legendary Pokemon, Rayquaza. Just remember to use an ice-type Pokemon for counters, stock up on berries, and use curve-throws so that Rayquaza does not have any chances to escape.