How to Get Slaking in Pokémon GO

The Pokémon game series introduced a spinoff called Pokémon GO which requires players to partake in physical activities such as walking, running, or jogging to go and find different types of Pokémon.

It is a brand-new gameplay element that cannot be found in other Pokémon games. Nearly all Pokémons in the Pokédex are included in the game, from Generation I to the latest Generation.

Slaking, of course, is one of the Pokémon you can find in the game. If you are looking to add a Slaking to your team, then look no further. This article will guide you through how to obtain one in the game. 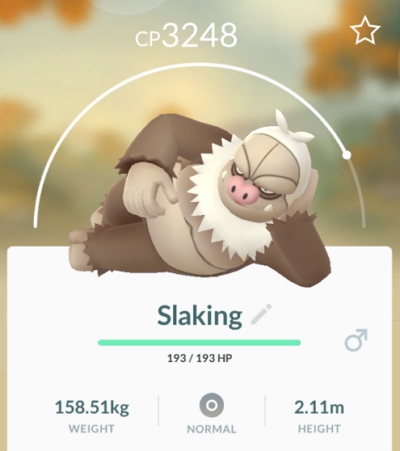 What is a Slaking in Pokémon GO?

Slaking is a Normal-type Pokémon that was introduced to the series back in Generation III. It is the final evolutionary form of Slakoth.

In the anime, it is known to be lazy yet extremely powerful when it actually attacks. This makes it a double-edged sword to add to your arsenal.

Its laziness actually reflects its gameplay both in Pokémon GO and the mainline games. In Pokémon, his Fast attack “Yawn” does not deal any damage at all.

But once you use “Yawn” enough times, you will be able to use its Charge attack “Hyper Beam”, which deals tons of damage and instantly wipes out weaker Pokémon.

How Do You Get Slaking in Pokémon GO?

There are tons of ways you can get a Slaking in Pokémon GO. Let’s go through each one of them and decide for yourself which one would be the most convenient route to take.

Find One in the Wild

The first method relies on luck. Generally, final evolutionary forms are extremely hard to find in the wild, but if you are lucky enough, then you might encounter one right away.

Still, it won’t be an easy catch. Slakings usually have a high base CP, which results in a low catch rate. You might have to stock on berries and practice your Pokéball throwing skills if you want to have a chance of catching it.

Encounter One During TCG Events

TCG events boost the encounter rate of the Pokémon that is featured in the said event. This is a quicker and easier way compared to finding a Slaking in the wild.

However, TCG events don’t happen often, and there has already been an event featuring Slaking.

The chances of such an event happening again are low, but don’t be discouraged! You can always hope and wait for a repeat.

Catch and Evolve a Slakoth

The straightforward way of obtaining a Slaking is to simply catch a Slakoth and evolve it. This is easier said than done, though.

Catching a Slakoth is easy since it is a pre-evolved form. But you have to gather enough Slakoth candies for it to evolve into a Vigoroth first, then into a Slaking. That is where the challenge resides.

Don’t worry, there are a lot of ways to obtain Candies. You can catch more Slakoth, walk it as a Buddy, or obtain Rare Candies through quests and battles.

You can also get a Slakoth by hatching a 10KM egg. This is a faster way of evolving it into a Slaking as well since you would gain 16 to 32 candies for every newly hatched Slakoth.

However, the downside to this is that you aren’t guaranteed a Slakoth whenever you hatch an Egg.

It all boils down to chance in the end since you can obtain a Slakoth or another Pokémon entirely.

Although lazy, Slaking is still one of the Pokémon that can pack a punch. This makes it a desirable Pokémon to have on your team.

Obtaining one is quite the task, though. If you are lucky, you might just encounter one in the wild right away, even without a TCG event happening.

However, the most straightforward way is to evolve a Slakoth into a Slaking. This might look easy but is actually quite taxing.

You would have to gather a lot of Slakoth candies before you can evolve it into a Vigoroth, and then into a Slaking.

If you have any comments on how to get slaking in Pokémon GO, shoot us a comment down below.