Pokémon Go Remote Raid Invite: How to Invite Your Friends to Raid Battle

The only thing better than playing Pokémon Go and catching as many rare Pokémon as you can is being able to do it with your friends.

The much-awaited “play with friends” feature is here and you can use it to take part in joint remote raids with your friends.

In this article, we will show you how you can invite your friends to take part in these remote raids in Pokémon Go and how you can make the process much easier.

Pokémon Go Lets You Remote Raid with your Friends

Players have been waiting for this feature for quite a while and it is finally available.

Rolled out on July 15, the remote raid was initially only available to players of a level 40 or higher, but this requirement has since been reduced to a level 32.

Before this rollout, players could only invite friends to take part in Raids in person.

Now players can join a Raid Battle remotely and the number of people that can participate has also been increased from 5 to 10.

How to Invite Your Friends to a Remote Raid

The first requirement is that you will have to join a public or private Raid lobby.

You must also have a Remote Raid pass item if you are not in physical proximity to an actual raid.

Once these requirements are met, click on the “Invite Friends” option on the right side of the screen in the game and choose the friends that you would like to invite to the game.

You can invite 5 people at a time but after the cooldown period, you might be able to invite more.

The friends you select will receive a notification to join your raid. Once they accept and get into the lobby, tap on the “Battle” button to begin getting ready for the Raid.

If you have to leave the lobby yourself, invited friends can join the Raid Battle.

But if you are the only Trainer in the Raid Lobby and leave before anyone else (invited friend or otherwise) joins, your invited friends will no longer be able to join.

Sometimes the remote raids invite system can be buggy according to some Pokémon Go users.

If you know in real-time that someone has sent you an invite, perhaps through messenger or remote raid apps, using the method is a good way to get the invites to appear quickly:

Click on things like a nearby pokestop, you can force the game to refresh. You can get the invite to appear right away by refreshing. In some cases, such as if your internet is slow, a second trial may be required.

If you're sitting at home with no stops or encounters nearby, you can try to pull up the friend's menu (assuming your game doesn't slow down). It will also work to help you get the remote raid invites quickly.

Thanks to Reddit user /u/arvindjha114/ and /user/Josnae/ for providing the tricks.

How to Accept an Invitation to a Raid Battle

To accept an invitation correctly, follow these simple steps:

Step 1: Once you are invited to a remote Raid Battle, you should be able to see an in-game notification or a push notification letting you know that you have been selected.

Step 2: When you tap on the notification  the Pokémon GO app will open, and you can then tap the active raid invitation from the "Nearby" menu. You can also tap the in-game notification to go straight to the Raid Battle you've been invited to. 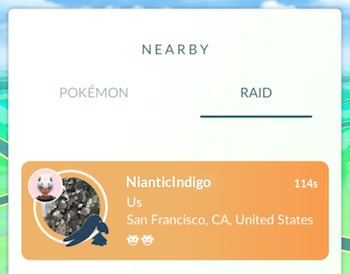 Step 3: To be able to take part in the battle, you have to tap on the “Battle” button from the Raid screen and then you can use the Remote Raid Pass if you are not within reach of the Gym.

Nearby” menu so you can use it to rejoin the battle at any time.

If you are still having problems finding players for remote Raids. Read this iMore Tutorial. In it, you will find everything you need to know about how to find friends and invite them to a Raid and even how to conduct joint raids.

Taking part in Remote Raids with friends is just another component that makes this game the best ever. It is our hope that this tutorial will help you set up joint remote raids and take part in them successfully.