Need a tool that can easily bypass the iCloud Activation Lock? So that you can access all the features of the iPhone?

Then check out Checkra1n iCloud Bypass. The tool is an effective fix for the issue of being unable to bypass the iCloud activation lock.

Checkra1n iCloud Bypass is free to use but is it reliable? Read below to find out how to use the Checkra1n tool, discover an alternative tool, and more.

Currently, you can jailbreak your iPhone 5S to iPhone X for iOS firmware 12.3 and later.

The team has created an app, Checkra1n, which you can download on a Mac and jailbreak the iOS device by connecting it with a USB.

The process to jailbreak the device is simple and easy. If you like to know about the process, you can visit https://checkra.in/ to check it out for yourself.

The vulnerability the hackers found out has to do with the hardware itself. This is the reason Apple cannot patch it by releasing firmware updates.

They can only fix the solution by physically changing the configuration of the hardware. For this reason alone, the Checkra1n app has become the talk of the town in the cyber defense community. 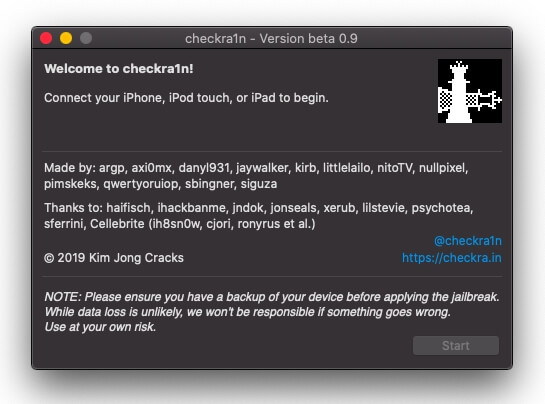 Is Checkra1n Safe to Use?

You know the Checkra1n tool is used to jailbreak an iPhone but is it safe to use? Checkra1n is a trusted tool for jailbreaking an iPhone, but it is not completely safe.

The dev team has only launched its beta version to the public. Therefore the supported devices of beta 1.0 can be jailbroken.

However, the app is in the beta stage, and bugs still need to be fixed. Some bugs that can affect your iPhone are boot loops, the screen becoming unresponsive, and more.

If you want to use the Checkra1n app, keep a backup of your important files and data.

Yes, Luca Todesco and his dev team are well-known in the iOS hacker community, but let’s wait for the tweaks to be updated or use an alternative to enjoy your Apple device to the fullest.

How to Use Checkra1n for iCloud Bypass

Before we begin installing and using the Checkra1n app, we need to fulfill some prerequisites. They're necessary if you want to install the tools properly.

If you meet all the above requirements then you can install and use the Checkra1n app.

How to Use Checkra1n to Bypass iCloud Lock

Use the Checkra1n to bypass iCloud on iPhone by following the instruction below:

Step 2. Install two more tools, usbmuxd and brew. You can enter the following commands in the Terminal app:

Step 4. Connect the iPhone to your Mac and jailbreak the iPhone.

Step 5. Create a tunnel with the help of usbmuxd iProxy tool and change the Port 2222 to Port 44 (if this port fails then use Port 22) by using these commands:

Step 7. Patch the systems setup file and move the location with these commands:

You have now successfully bypassed the iCloud activation lock by using the Checkra1n tool. You wouldn't encounter any problem with the process if you exactly follow the instructions.

Bypassing iCloud with the Checkra1n app can result in the following functions not working:

Though the Checkra1n app is effective in bypassing iCloud. But with the limitations, you might reconsider using it.

An alternative tool to unlock the iCloud activation lock is to use the Unlockit tool. The tool jailbreaks your iPhone and bypasses the activation lock.

You can also make phone calls and add a new Apple ID after the unlock. This tool works on both Mac and Windows systems.

Follow these instructions below on how to use Unlockit to bypass iCloud activation lock:

1. Install the Unlockit tool on your computer and run it.

2. Select the 'Remove iCloud Activation Lock' and start the process.

3. Connect the device to the system and wait until Unlockit jailbreaks the device.

4. Download the jailbreak package and hit the 'Jailbreak' button. Follow the on-screen guide to put the iPhone in DFU mode.

5. Click the 'Remove' button after the process has been completed. Now, Unlockit will start the process to bypass the iCloud activation lock.

You have successfully bypassed the iCloud activation lock and now you can use the iPhone without any problems.

What is a jailbreak?

Jailbreak has only one function: to let the user customize the iOS platform. It's why it became popular among the hacker and tech community.

A jailbroken device gives you advantages like downloading any third-party apps that are not available on the App Store.

In other words, you have the ability to install apps (or tweaks, as they call them) that are in the Cydia repository.

It is similar to downloading a third-party app on Android by using the .apk files (even the app is not available on the Play Store).

This is great, right? Well, actually not. A jailbroken iOS device is at great risk of being attacked and compromising its security.

Apple takes many steps to prevent any malware attacks thanks to its enterprise-grade security; and checking every app for malicious viruses before uploading it to the App Store.

Many users that have jailbroken their iPhones can download and install apps. Apple does not recommend these apps for security purposes.

A service like SSH (Secure Shell) leaves the iPhone at a vulnerable place for any remote attacks if the credentials are not updated.

In 2015, a global attack called KeyRaider affected more than 225,000 jailbroken iPhones. They also managed to steal users' login data for banking and other services.

When will Checkra1n for Windows get released?

Checkra1n apps currently support macOS. However, the developers have announced that they're testing the tool on Windows but are facing issues.

They further said that they would release the Checkra1n tool beta version for Windows at a later time.

You can use the Checkra1n tool to bypass the iCloud activation lock. But due to the complex process of inputting commands and no stable version for Windows, we recommend using the Unlockit tool as a better alternative to Checkra1n.

If you need more information regarding any of the tools to bypass the iCloud lock, please ping us in  the comments below.